Katherine Huffman has been accepted to Indiana University.  Her plans are Business with a focus on environmental aspects. She is passionate about the environment even though she admits to not having a green thumb.

Kit has been on the Cross Country , Track & Field and Indoor Track Teams all four years of high school. For Cross country she was the Team Captain, and earned Academic All-State, All-conference, All-Regional, and All-County recognition. She also was Team Captain for the Track & Field Team as well as earning Academic All-State, Conference Champion , Regional Champion and 2nd at State recognition.

She had maintained a 4.01 GPA doing all that as well as working as a babysitter, a waitress and party hostess at BAM Entertainment Center, front desk at the Maplewood hotel, and washing cars. Kit also began in January of 2016 averaging 15 hours a week of being self-employed by offering guided hiking tours. 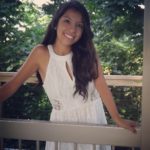 Our Fennville Garden Club Scholarship for Fennville was awarded to Vanessa Iridian Martinez.

Vanessa has been accepted to Grand Valley State, Kendall College of Art and Design and Calvin College, she has yet to make her choice.

She will be majoring in drawing or illustration and or majoring in biological science or biology. Art and Science have always been subjects of interest to her. She is interested in becoming a pediatric dental hygienist.

She is fluent in Spanish and English. Vanessa was on the honor roll all four years of high school. She received 3rd place freshman year and first place her senior year at the Fennville Goose Festival Art Show. Vanessa was also in the Michigan Youth Art Festival at WMU – Top 100.

Want to become a Member?

Would you care to make a tax deductible donation?